How can we model the epidemiology of COVID-19?

The F word in FAIR - the need for structured metadata

Are patients with hypertension and diabetes mellitus at increased risk for COVID-19 infection?

A systematic review of COVID-19 cases

Collating public data on COVID, made Open and accessible

Method for meta-analysis of studies of R0 for COVID-19

Data repository of public and Open data on COVID

Results of a meta-analysis of R0 for COVID-19

Those with chronic respiratory conditions under-represented in COVID-19 cases

Could treatment for COPD be protective against COVID-19 symptoms?

Hypertension is the main risk factor, other than age, for COVID-19

In 2011, I suggested that the standard monolith that is the conventional scientific article could be broken down into two separate, but interlinked components, being the "story" or narrative of the article and the data on which the story is based. Later in 2018 the bibliography in the form of open citations were added as a distinct third component.[cite]10.1038/d41586-018-00104-7[/cite] Here  I discuss an approach that has taken this approach even further, breaking the article down into as many as eight components and described as " Octopus publishing" for obvious reasons.

Items 1-3, 5-6 and probably 7 are the dis-assembled components of the standard concept of a scientific publication and item 4 is the data component I refer to in my introduction above. Interestingly, the article bibliography is not separated out into these components, and is presumably distributed throughout the resulting fragments. The essential concept behind this dis-assembly is that each component can rest on its own, provided it is contextually and bi-directionally linked into the others. The author(s) of any individual component will get credit/recognition for that component. A conventional mapping would be that the same author set would be responsible for all the individual items, whilst recognising that each component could in fact have its separate authorship.  Thus one might get credit for just suggesting a problem, or for suggesting a protocol for its testing, for acquiring just the data, or for proposing an original analysis or interpretation.  Any author's reputation would then be established by the integrated whole of their contributions across the whole range of article components (leaving aside how the weightings of each individual contribution would be decided).

I decided to try to give it a go via a prototype at https://science-octopus.org/publish which as you can see is one of the eight above. The process starts with the prospective author providing their ORCID credentials, against which unique metadata is presumably generated. 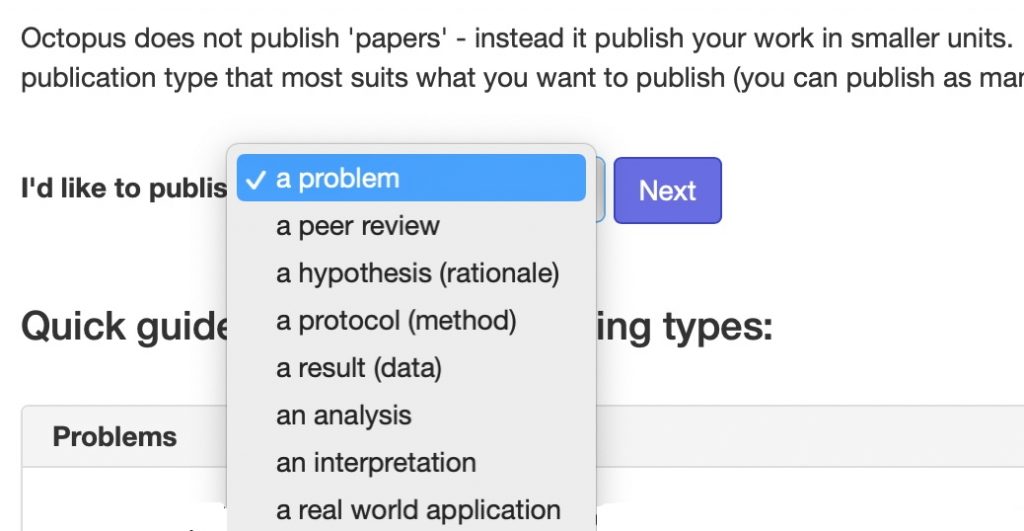 The next stage however is more interesting; Unlike any other publication platform, Octopus requires all publications to be linked to others that already exist. At the current stage of development, the prototype only has a few entries linked to COVID-19 as a topic, which I did not feel able to add to. Selecting one of those at random, one is asked to link any associated data via a DOI, then the optional indication of appropriate keywords, followed by standard questions about funding sources, conflicts of interest and license declaration. I wanted to use CC0, but this was not an option. 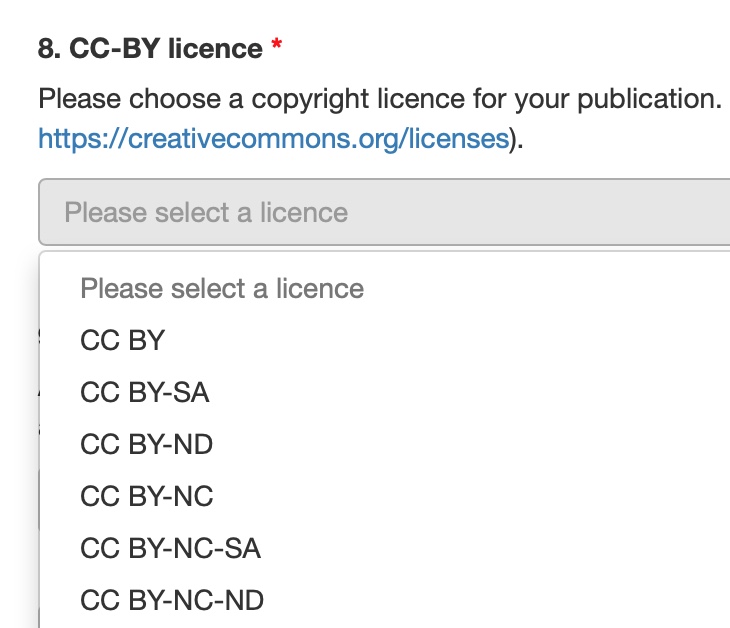 Finally at this stage a question about any other related publications, but only from the list known to Octopus.

Conflict of Interest Declaration:
No conflicts of interest

Octopus. Built for scientists.
This page has been printed from https://app.science-octopus.org/publications/view/61168f06b97aa72147cc5a72